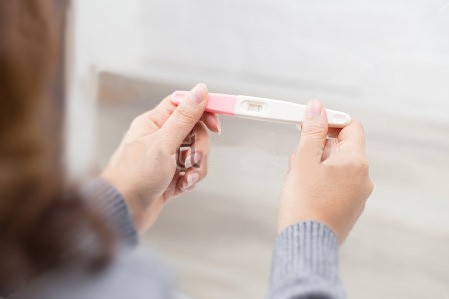 The period from conception to birth. After the egg is fertilized by a sperm and then implanted in the lining of the uterus, itdevelops into the placenta and embryo, and later into a fetus. Pregnancy usually lasts 40 weeks, beginning from the firstday of the woman's last menstrual period, and is divided into three trimesters, each lasting three months.

In this month, the heart starts to pump and the nervous system (including the brain and spinal cord) begins to develop.The 1 in (2.5 cm) long fetus has a complete cartilage skeleton, which is replaced by bone cells by month's end. Arms,legs and all of the major organs begin to appear. Facial features begin to form.

By now, the fetus has grown to 4 in (10 cm) and weighs a little more than an ounce (28 g). Now the major blood vessels and the roof of the mouth are almost completed, as the face starts to take on a more recognizably human appearance.Fingers and toes appear. All the major organs are now beginning to form; the kidneys are now functional and the four chambers of the heart are complete.

The fetus begins to kick and swallow, although most women still can't feel the baby move at this point. Now 4 oz (112 g),the fetus can hear and urinate, and has established sleep wake cycles. All organs are now fully formed, although they willcontinue to grow for the next five months. The fetus has skin, eyebrows, and hair.

Now weighing up to a 1 ibs (454 g) and measuring 8-12 in (20-30 cm), the fetus experiences rapid growth as its internal organs continue to grow. At this point, the mother may feel her baby move, and she can hear the heartbeat with astethoscope.

Even though its lungs are not fully developed, a fetus born during this month can survive with intensive care. Weighing 1-1.5 lbs(454-681 g), the fetus is red, wrinkly, and covered with fine hair all over its body. The fetus will grow very fastduring this month as its organs continue to develop.

There is a better chance that a fetus born during this month will survive. The fetus continues to grow rapidly, and mayweigh as much as (1.3 kg) by now. Now the fetus can suck its thumb and look around its watery womb with openeyes.

Growth continues but slows down as the baby begins to take up most of the room inside the uterus. Now weighing 4-5 lbs(1.8-2.3 kg) and measuring 16-18 in (40-45 cm) long, the fetus may at this time prepare for delivery next month by movinginto the head-down position.

Adding 0.5 lb (227 g) a week as the due date approaches, the fetus drops lower into the mother's abdomen and preparesfor the onset of labor, which may begin any time between the 37th and 42nd week of gestation. Most healthy babies willweigh 6-9 lb (2.7-4 kg) at birth, and will be about 20 in. long.

While pregnancy may seem like a simple term, there are different types of pregnancies. Most are a result of physical differences between women, but some are related to multiple egg release, among other reasons.

These are the normal pregnancies, when the fetus or fetuses implant inside the uterus. The placenta is attached to the inside of the uterus, to the uterine muscle.

Ectopic pregnancies occur when the fertilized egg implants in a place other than the fallopian tube or uterus. It can be in the neck of the uterus or in the abdomen. The pregnancy is not viable and the body will most likely spontaneously abort the fetus.

Tubal pregnancies occur when the fertilized egg implants in the fallopian tube instead of the uterus. These pregnancies are not viable and must be terminated if a miscarriage does not naturally occur.

Singlet pregnancies occur when one egg meets one sperm and one fetus develops.

Natural multiples, including twins, triplets and quadruplets have been reported. During fertility treatments, multiples may be more likely and can create five or more fertilized and implanted fetuses.

Pregnancies for women with lupus can be complicated by blood clotting. Lupus is an auto-immune disease.

This is a short, concise list of the types of pregnancies. Other terms commonly used by doctors include early pregnancy, first pregnancy and new pregnancy. These terms have nothing to do with the fetus or physical differences between pregnant women, they are only used to describe pregnancies and where a woman is in the pregnancy.

But there are early symptoms of pregnancy that may point to the possibility. Here's what to look for.

Do All Women Get Early Symptoms of Pregnancy?

Also, because the early symptoms of pregnancy often mimic the symptoms you might experience right before and during menstruation, you may not realize you're pregnant.

What follows is a description of some of the most common early symptoms of pregnancy. You should know that these symptoms may be caused by other things besides being pregnant. So the fact that you notice some of these symptoms does not necessarily mean you are pregnant. The only way to tell for sure is with a pregnancy test.

After conception, the fertilized egg attaches itself to wall of the uterus. This can cause one of the earliest signs of pregnancy -- spotting and, sometimes, cramping. That's called implantation bleeding. It occurs anywhere from six to 12 days after the egg is fertilized.

The cramps resemble menstrual cramps, so some women mistake them and the bleeding for the start of their period. The bleeding and cramps, however, are slight.

Besides bleeding, a woman may notice a white, milky discharge from her vagina. That's related to the thickening of the vagina's walls, which starts almost immediately after conception. The increased growth of cells lining the vagina causes the discharge.

This discharge, which can continue throughout pregnancy, is typically harmless and doesn't require treatment. But if there is a bad smell related to the discharge or a burning and itching sensation, tell your doctor so they can check on whether you have a yeast or bacterial infection.

Breast changes are another very early sign of pregnancy. A woman's hormone levels rapidly change after conception. Because of the changes, herbreasts may become swollen, sore, or tingly a week or two later. Or they may feel heavier or fuller or feel tender to the touch. The area around the nipples, called the areola, may also darken.

Other things could cause breast changes. But if the changes are an early symptom of pregnancy, keep in mind that it is going to take several weeks to get used to the new levels of hormones. But when it does, breast pain should ease up.

Feeling very tired is normal in pregnancy, starting early on.

A woman can start feeling unusually fatigued as soon as one week after conceiving.

Why? It's often related to a high level of a hormone called progesterone, although other things -- such as lower levels of blood sugar, lower blood pressure, and a boost in blood production -- can all contribute

If fatigue is related to pregnancy, it's important to get plenty of rest. Eating foods that are rich in protein and iron can help offset it.

Morning sickness is a famous symptom of pregnancy. But not every pregnant woman gets it.

The exact cause of morning sickness is not known but pregnancy hormones likely contribute to this symptom. Nausea during pregnancy may occur at any time of the day but most commonly in the morning.

Also, some women crave, or can't stand, certain foods when they become pregnant. That's also related to hormonal changes. The effect can be so strong that even the thought of what used to be a favorite food can turn a pregnant woman's stomach.

It's possible that the nausea, cravings, and food aversions can last for the entire pregnancy. Fortunately, the symptoms lessen for many women at about the 13th or 14th week of their pregnancy.

In the meantime, be sure to eat a healthy diet so that you and your developing baby get essential nutrients. You can talk to your doctor for advice on that.

The most obvious early symptom of pregnancy -- and the one that prompts most women to get a pregnancy test -- is a missed period. But not all missed or delayed periods are caused by pregnancy.

Also, women can experience some bleeding during pregnancy. If you are pregnant, ask your doctor what you should be aware of with bleeding. For example, when is bleeding normal and when is it a sign of an emergency?

There are reasons, besides pregnancy, for missing a period. it might be that you gained or lost too much weight. Hormonal problems, fatigue, or stress are other possibilities. Some women miss their period when they stop taking birth control pills. But if a period is late and pregnancy is a possibility, you may want to get a pregnancy test.

Other Early Symptoms of Pregnancy

Pregnancy brings changes in your hormonal balance. And that can cause other symptoms that include:

A pregnant woman could have all of these symptoms, or maybe have only one or two. If any of these symptoms become bothersome, talk with your doctor about them so you can make a plan to offset them.

Pregnancy is the period where everyone and anyone always have some tips to be given to the mother to be .Don’t be fooled with myths and believe every word you her about what to eat and what not to eat or eat for two and so many things you would be advised.SK LEAN programme you will get semester wise detailed, scientific, physiological need based and my personal experience will help you to be healthy and with proper gain.